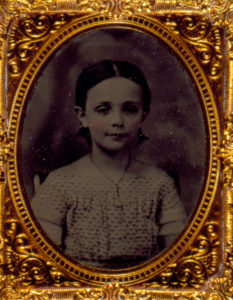 Sarah Orne Jewett wrote this to her friend while in her forties.

Descriptions of her character, however, consistently return to the words “simple” and “honest.”

Known for her humor, lack of pretension, and playful nature, Jewett had an affinity for children and for childhood pastimes, and as an adult, she retained a quality of youth.

Jewett wrote to Annie Fields about an incident with her nephew Teddy, whose nickname was Stubby:

“This morning I was out, taking a drive about town with John and I saw such a coast from way up the long hillside down to the tavern garden, and directly afterward down in the village I beheld Stubby faring along with his sled, which is about as large as a postage-stamp. So I borryed it, as you say, and was driven up to the top of the hill street and down I slid over that pound-cake frosting of a coast most splendid, and meekly went back to the village and returned the sled. Then an hour later in bursts Stubby, with shining morning face: ‘There were two fellows that said Aunt Sarah was the boss, she went down side-saddle over the hill just like the rest of the boys!'”
— Letter to Annie Fields, December 4, 1885

In an 1893 magazine piece, “Summer Plans of Well-known Authors,” many other writers wrote of travel and seaside retreats. Sarah Orne Jewett’s entry reads: “Miss Sarah Orne Jewett will remain at South Berwick, Me., during the greater part of the summer, and will be busy with work for the magazines.” The Critic 19 (May 1893): 321-323