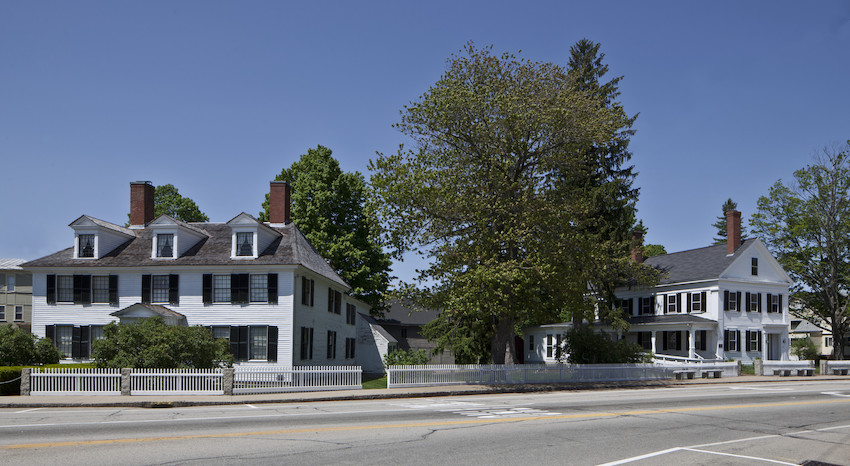 When John Haggens, the original homeowner, had the Georgian manse built, 1774-1780, it was the only residence on the site. Captain Theodore F. Jewett purchased the property from Haggens around 1830. Captain Jewett invited his son, Dr. Theodore H. Jewett, and his wife Caroline, to come live at the house. Sarah Orne Jewett was born in the Georgian house in 1849 two years after her sister Mary.

Five years later, Captain Jewett had built the Greek Revival on the right, to house the growing Jewett family.

Sarah grew up in the Greek Revival. When she was thirty-eight, Sarah and her sister Mary inherited the Georgian and moved in with their mother. Their younger sister, Carrie, who had married and given birth to a son, moved into the Greek Revival with her family.

The site was a family compound throughout most of Sarah’s life.

For Sarah growing up, her grandfather’s house was a place of stories—from the retired sea captain and Sarah’s step-grandmother Eliza, from a myriad of their guests, and from cooks and maids working in the house. Sarah’s imagination was stirred by objects in the house: the “power of china,” collected by four wives marrying in succession into the same house; a sideboard that wafted the aroma of cake and wine; and “… odd china figures and cup and vases, unaccountable Chinese carvings and exquisite corals and sea-shells, minerals and Swiss wood-work, and articles of ‘vertu’ from the South Seas.” (Sarah Orne Jewett, “Shore House,” 1873)