The Seventeenth and Eighteenth Centuries 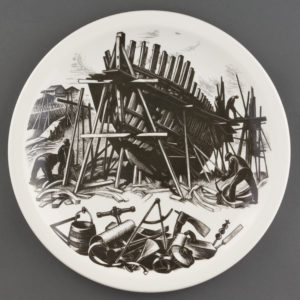 As Maine communities evolved in the seventeenth century, Maine itself became a part of Massachusetts in 1677; Maine did not achieve statehood until 1820. The area that eventually became the town of South Berwick, retained its Wabanaki name, Quamphegan, until 1814, when South Berwick incorporated as a village.

Colonists in seventeenth and eighteenth-century Southern Maine were looking to build an economy and wood was an available commodity. They sold timber for export. Trade that involved processed timber—shipbuilding and ship parts, such as masts, and wooden barrels—all became major aspects of trade.

The Maine shipbuilding trade flourished. The wood from Maine trees was an inexpensive raw material, and that translated to profit. Sea captains sailed to ports around the world with cargoes of timber and other exports, such as fish and fur. The fur trade died out as beavers were nearly eradicated. Fish continued to be an export; fish considered of lesser quality were sent to the West Indies to supply meager food for enslaved people on sugar plantations there.