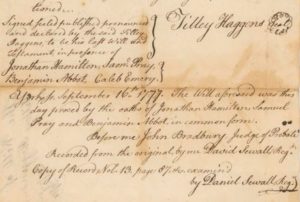 John Haggens was a son of Tilly Haggens (d. 1777) an Irish immigrant who settled in Berwick with his family, became a shopkeeper and bought up a good deal of land in the middle of Quamphegan.

As yet, nothing is known of Caesar. This is because few records were kept of enslaved people, and because enslaved people were robbed of their most personal possessions—their names, first names and surnames. There was a lot of crossover in naming enslaved people, with names derived from myth, biblical references, and as jokes—Caesar, Cato, Dinah, and Prince were all common names given to the enslaved.