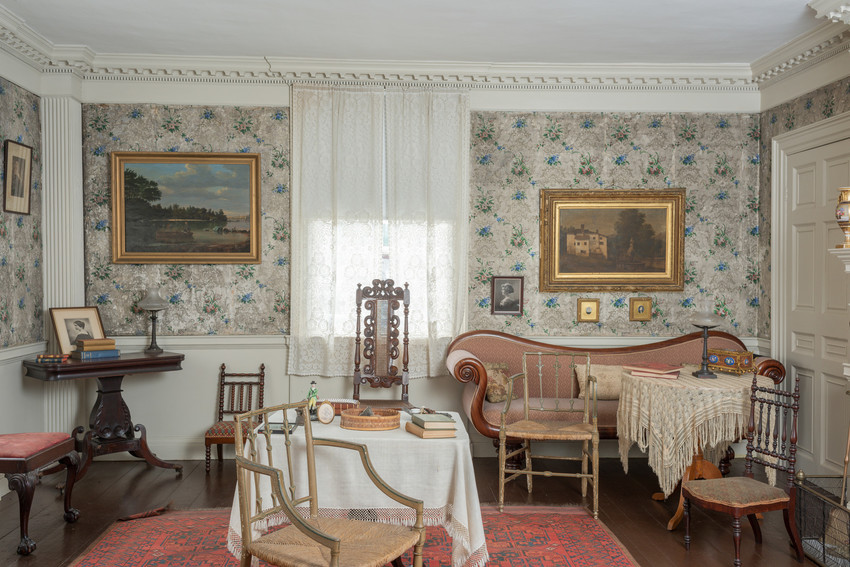 The parlor of eighteenth and nineteenth-century homes was considered the best room and a public space where visitors were entertained.

The decorative arts and wall objects in a parlor would reflect the tastes and interests of the homeowner. In the Jewett sisters’ parlor, Sarah Orne Jewett’s books are displayed prominently, as are framed photographs of Jewett’s partner, Annie Fields, and close friend and designer of Jewett’s book covers, Sarah Wyman Whitman.

Rooms were typically gendered in the nineteenth century. Libraries or offices were generally male spaces while parlors were female. A delicate floral paper like this one would have only been appropriate in a parlor or bedchamber. This Rococo striped wallpaper, made in France or the United States between 1850-60 was probably installed in the parlor around the time Sarah’s Uncle William inherited the house in 1860. 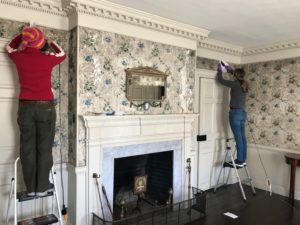 Wherever possible Historic New England strives to maintain historic wallpapers in situ. Although the papers are sometimes disfigured with age, we prefer the authenticity of leaving them intact as long as possible. Here two conservators clean a roughly one hundred sixty year-old paper and tack down loose edges.

Bronzing baby shoes was a popular way to memorialize childhood beginning in the late nineteenth century. While its original wearer is unknown, it appears in 1931 photographs of the parlor and was owned by Sarah and Mary Jewett. Its placement in this display evokes the childlike quality Sarah had about her well into adulthood and her love of childhood mementos, such as dolls.

The carved pen from Africa or Asia has a pointed blade that can be used as a letter opener. Sarah Orne Jewett may have taken a fancy to this pen and purchased it herself, or she may have received it as a gift.
The cast lead pen stand holds porcelain ink wells. A prolific writer, Sarah would have found this stand, while decorative, functional as well.
“[Jewett] may write 8000 or 10,000 words in a day… When she has a long story on hand, she writes from 2000 to 4000 words a day, five days in the week.” – Interview, Philadelphia Press, 1895

This late nineteenth century Japanese wicker case is filled with rocks and shells. One can imagine Sarah using this case to hold the treasures she gathered in her pockets on an afternoon jaunt.

A basket of rocks and shells, souvenirs, perhaps, of walks in the woods or along the river’s edge with her dogs, are a tangible reminder of the deep connection Jewett had with natural world.

The Country of the Pointed Firs is widely considered Jewett’s masterpiece. The natural world reflects the inner lives of her vivid characters in this work centering on themes of community and isolation, friendship and loneliness, and the power of story.

This mid-nineteenth century figure of a hunter and his dog evokes Jewett’s love of the outdoors and her affection for her dogs. The figure is also reminiscent of the hunter character in "A White Heron," one of Jewett's most enduring works.

"A Friendship in Books" 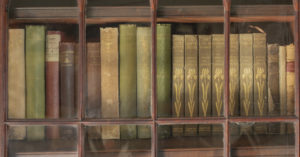 Of these children’s works, Betty Leicester was quite successful. The wholesomeness of the story was popular with mothers in the late nineteenth and early twentieth centuries.

“I am sure that you must like a great many other books since you like these stories of mine. And I am so glad, because you will always have the happiness of finding friendships in books, and it grows pleasanter and pleasanter as one grows older. And then the people in books are apt to make us understand ‘real’ people better, and to know why they do things, and so we learn sympathy and patience and enthusiasm for those we live with, and can try to help them in what they are doing, instead of being half suspicious and finding fault.” 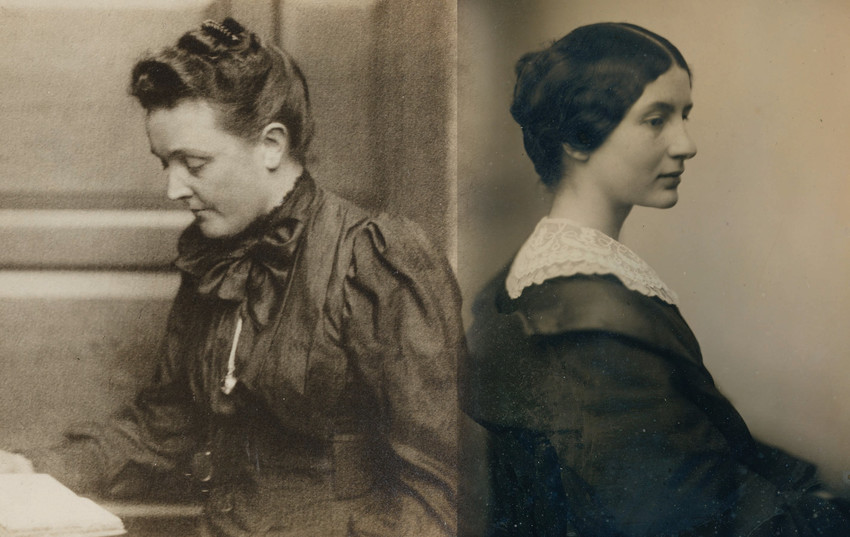 "It is like remembering that I have dared to talk nonsense and hug and play generally with something that turned itself into a whole world full of thoughts and sights and beautiful things..."
1:39

"But last night there was a dismal time, for the two bowwows got in the parlor..."
1:26

Although this painting, on view in the parlor of the Jewett House, is a late nineteenth-century copy showing an imagined scene in Poland, it’s a reminder that no less than cars are today, sleighs and carriages could be both exhilarating and dangerous.

Sarah wrote to Annie of her adventures with her nephew Teddy (often called Stubby by the family):

This morning I was out, taking a drive about town with John and I saw such a coast from way up the long hillside down to the tavern garden, and directly afterward down in the village I beheld Stubby faring along with his sled, which is about as large as a postage-stamp. So I borryed it, as you say, and was driven up to the top of the hill street and down I slid over that pound-cake frosting of a coast most splendid, and meekly went back to the village and returned the sled. Then an hour later in bursts Stubby, with shining morning face: “There were two fellows that said Aunt Sarah was the boss, she went down side-saddle over the hill just like the rest of the boys!”
– Letter to Annie Fields, December 4, 1885

However, fun and excitement turned to tragedy when Sarah was in a serious carriage accident in 1902 from which she never fully recovered. Two years later her sister Mary was also thrown from a carriage, although her injuries were less severe.