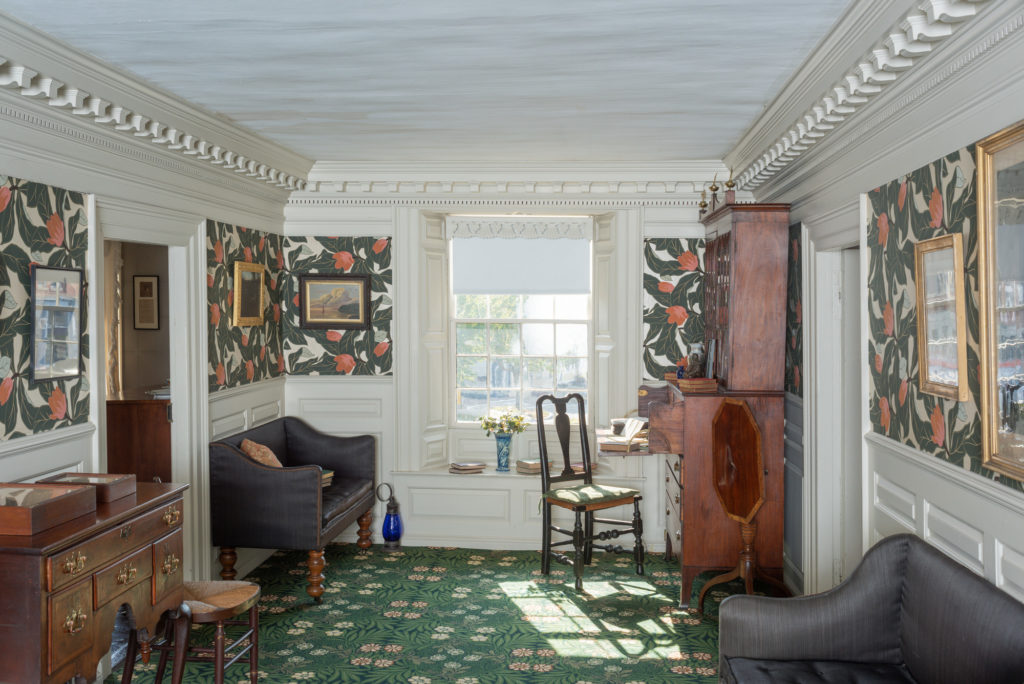 Sarah Orne Jewett wrote in “Lady Ferry,” Old Friends and New, “One often hears of the influence of climate upon character; there is a strong influence of place, and the inanimate things which surround us indoors and make us follow out in our lives their own silent characteristics. We unconsciously catch the tone of every house in which we live, and of every view of the outward, material world which grows familiar to us, and we are influenced by surroundings nearer and closer still than the climate of the country which we inhabit.”

Jewett was born in her grandfather’s house and grew up next door in a house built on the family compound. As a child, she sat on the fence lining the property and watched townspeople coming and going in the village center. Often spending time in the house of her grandfather, a retired sea captain, she would have heard the stories of old sailors and traders, those of the cooks and maids bustling around the house, and those of her step-grandmother, with whom she was close. A “wild and shy” child, she preferred the woods, fields, and river to the indoors, and books to the classroom. 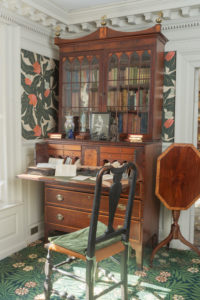 As an adult, Jewett wrote at her grandfather’s desk in the second-floor hall, by a large front window overlooking the town center and the people of South Berwick. The choice of writing place seems apt for an author who followed her father’s advice: “Show people as they are.”

Editor and friend William Dean Howells wrote, in a 1903 letter to Sarah Orne Jewett, “Your house will always remain a surprise to me, not because it was not the fittest possible setting for such literature as yours, but just because it was.”

Built in 1774, Jewett House is a classic example of Georgian architecture. The key features of the style include a symmetrical five bay facade with windows aligned horizontally and vertically. (The dormer windows on the roof were added in the late nineteenth century by Sarah and Mary.) Jewett House also has a portico at the entrance with a classical entablature supported on free standing columns. 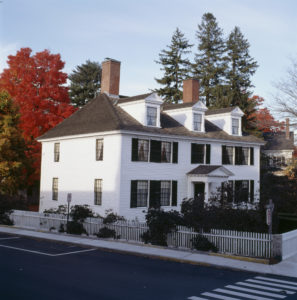 The arch is supported on engaged columns, or pilasters, that have ornamental grooves known as fluting that capture light and shadow.

An ornamental arch with a central carved keystone separates the entrance from the stair.

Paneled wainscoting serves to divide the walls into thirds with a base, upper field, and cornice.

Template and the Template Project

In order to discover the original paint of the hall, a deep chip was removed from the wall and its cross section examined through a microscope, revealing each layer of paint. In this cross section from the hall, four individual layers of red paint were used to create the original wall treatment, followed by a single layer of modern white paint. The four original paint layers contained hand-ground pigments of various sizes, creating a depth in the color that was more like canvas painting than modern wall painting. As part of the restoration of the Eustis mansion, Historic New England hired specialized decorative painters to recreate the four layers of red in the hallway, restoring it to the original Pompeiian red.

Base layer of red paint.

Dairy farming was an important industry in nineteenth century Maine. While produce farms were hurt by the advent of the railroad and ensuing competition from the Midwest, railroad transport helped Maine dairy farms with refrigerated cars, so farmers could send products farther than had previously been possible.

A dumbwaiter was included in the china closet so that food could easily be sent from the kitchen upstairs to the night nursery where the three Eustis children took many of their meals.

The builders’ plans for the mansion indicate that was originally an elevator installed in the house, which would have been a simple cab that was used primarily for wood. An electric sawmill in the basement was used to cut wood to the proper size. The current elevator cab was upgraded in the early twentieth century.

This safe is located in the China Closet and would have housed the family silver and other valuable pieces. When the outermost door is closed it appears to hide a regular closet, but when opened reveals two different doors sets that lie beneath. The first is a faux wood grained metal door that locks with a key, and the second is a set of double metal doors, also faux wood grained, that open with a knob.

This telephone room was installed after the house’s initial construction when the Eustises replaced the Western Electric telephone that had been installed closer to the front door. As telephone conversations became more commonplace, the need for privacy prompted the addition of this tiny room.

Sarah Orne Jewett (1849-1909) was thirty-eight when she and her older sister Mary inherited their grandparents’ house. By this time, Jewett was a successful author, living at least half the year with her life partner Annie Fields, at Fields’ Boston home or traveling. Enjoying city life and more, devoted to Annie, Sarah Orne Jewett still considered herself made of “Berwick dust,” and spent several months a year at her Maine home, most of that time she devoted to her writing.

This long rectangular table has served as a centerpiece in the entrance hall since the house was built. Its impressive carving is in the style of the Italian Renaissance, a popular source for design in the late nineteenth century. One of the most notable practitioners in this style was the Italian carver Luigi Frullini (1839-1897) who worked for many wealthy Americans, most notably completing the decoration of two rooms at Chateau-sur-Mer in Newport. The Eustises believe that Frullini carved the panels flanking the sideboard in the dining room.