"It is like remembering that I have dared to talk nonsense and hug and play generally with something that turned itself into a whole world full of thoughts and sights and beautiful things..."
1:39 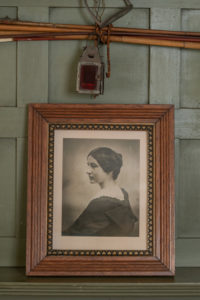 At first, the placement of a mirror in the corner of Sarah’s bedroom seems puzzling; its height and angle seem to serve no obvious function.

Standing from any angle in the room, Jewett could see her beloved Annie.

This little note came from dear [Celia Thaxter] this morning and I will send it right to you – Do tell me what she says – I am going over to Exeter this afternoon to see my grandfather and perhaps stay until evening – not overnight – Poor little Fuff being lonely at Nahant! – but it shall be ever so long before you shall be alone again…Kiss dear Rogery on the top of his smooth head for me – and Kiss Miss Fuffy Fields in the looking glass and play it was Pin! Day after tomorrow I shall have you!!

Sarah spent winters with Annie at her home, 148 Charles Street, a narrow four-story house overlooking a private garden and the Charles River in a somewhat stylish neighborhood of Boston. The area was a mixture of old wealth and new money, with many of Sarah and Annie’s friends of the literary world living within walking distance or carriage ride. The house is no longer extant, but at the time that Annie lived there first with her husband James T. Fields, and later with Sarah, it was the epicenter of Boston’s literary world. Friends might be invited for breakfast, luncheon, tea, or intimate evening, and Saturday afternoon they were “at home” for a salon of artists and writers. Sarah enjoyed the active social life and cultural pursuits she enjoyed with Annie living in Boston. While most of her focused writing was done in South Berwick, she did manage to eke out time to write at Charles Street, perhaps in the room pictured, the long and narrow library that Henry James called the Fields’ “waterside museum.”

In summer, Sarah and Annie would retreat to Annie’s summer home in Manchester, or Manchester-by-the-Sea, as her late husband James Fields had coined the area, to distinguish it from other New England towns by the same name. In 1873, the Fields had bought five acres known as Thunderbolt Hill and built a house there, naming it Gambrel Cottage. Once a fishing village, Manchester had by the late nineteenth century, like coastal towns of Southern Maine, become a tourist destination. A good part of Annie and Sarah’s seaside vacation would involve socializing with their Boston circle, including Sarah Wyman Whitman, Loulie Dresel, and Harriet Spofford. Sarah was glad when Sally Norton and Jessie Cochrane played music on their visits. She was surprised when Isabella Stewart Gardner brought her husband one visit, though he was deemed nice. They had poor weather on one of Alice Longfellow’s visits. Madame Blanc visited. Sarah’s sister Mary visited too. One of Sarah’s special vacation companions was Roger the Irish Setter: “But the best place to see this dog is by the sea-shore in the summer… Mrs. James T. Fields is at such times his best friend, for she oftenest invites him to walk along the beach and chase sandpipers.” (Gertrude Van Wickham, “Sarah Orne Jewett’s Dog,” 1889, Edited by Terry Heller, Coe College)

Sarah and Annie traveled to Europe together in 1882, 1892, 1898, and 1900. Annie had visited with her late husband James in prior years. Voyages included stays in England, France, and Italy. Sarah and Annie experienced both the thrills and the inconveniences of travel In 1882, on a visit to London, they were late for their rooms and so were recommended to another hotel; that establishment too was full and sent them to a third. On the same visit, they dined with a famous Scottish author and assisted in a rehearsal for his family’s production of Twelfth Night. On their 1892 tour of Europe, first sailing to Italy, they had a rough sea voyage. Sarah wrote to her friend Loulie Dresel about having been pitched out of the bed the first night and winding up with black eyes, and about Annie looking pale. On the same trip, Sarah got tonsillitis. Then, news came that Sarah’s brother-in-law, Edwin Eastman (sister Carrie’s husband) had died unexpectedly. But they enjoyed Genoa and Rome. Sarah loved Venice, where they were called on by Mark Twain, before traveling to France and then England. This painting Landscape at Cortina by close friend Sarah Wyman Whitman, hangs in Sarah’s bedroom in South Berwick and was likely a reminder of those (mostly) pleasurable trips.

On their 1892 trip to Europe, Sarah and Annie met Mrs. Humphry Ward, a British novelist and social reformer, living and teaching among the poor to improve poor children’s education. Her most famous work, Robert Elsmere, was controversial for promoting Christianity through social concern. Mary Augusta Ward, writing under her name Mrs. Humphry Ward, was against women’s suffrage and became the founding President of the Women’s Anti-Suffrage League. She, and a number of her sex who were against women’s suffrage, believed that women would lose their moral authority in society if they got the vote. Other anti-suffrage women believed that only men could solve the larger issues of the world. On meeting Ward, Jewett wrote to her sister Mary, “She is very clear and shining in her young mind, brilliant and full of charm, and with a lovely simplicity and sincerity of manner.”  Transcription by Terry Heller, Coe College.

Sarah and Annie also traveled within the United States. In the winter of 1888, Annie was diagnosed with pneumonia. Under medical advice, the two took a trip that spring to St. Augustine, Florida, for Annie’s health. On their 1888 trip, Sarah and Annie made a stop in Beaufort, South Carolina, and visited with the Loring family, including Katharine Peabody Loring. Katharine Loring was the domestic partner of Alice James, sister of novelist and Jewett-Fields friend Henry James. The term Boston Marriage is attributed to Henry James through his novel, “The Bostonians” (1886). It is sometimes speculated that the characters originating the term were based on the intense relationship of Katharine Loring and Alice James. (It is also speculated that these characters were inspired by the Jewett-Fields relationship.) In December 1892, on ten-year anniversary of the Jewett-Fields relationship, Sarah Orne Jewett wrote to Katharine Loring and mentioned her admiration of her closeness of heart with Alice. Alice James suffered from life-long mental and physical illness. Katharine Loring founded the first correspondence school in the United States and was an advocate for women’s education. This photo was taken at Royal Leamington Spa, England, circa 1890. Alice James is on the left, Katharine Loring on the right.

On their 1892 trip to Europe, Sarah and Annie visited Paris, where they met Madame Blanc—Marie Thérèse de Solms Blanc, pen name Thérèse Bentzon, a French writer and literary critic. Jewett and Madame Blanc had maintained a correspondence friendship since Blanc’s complimentary essay about A Country Doctor in Revue des Deux Mondes eight years earlier. According to Jewett biographer Paula Blanchard, in a continuation of their visit in a Barbizon cottage, Blanc shared with Jewett letters she had received from George Sand*. Jewett admired Sand’s writing and life of freedom and Sand had been influential in Blanc’s career. Blanc had started writing out of need, destitute after a divorce and mother to an infant son. She became successful, translating authors such as Mark Twain and introducing French readers to American authors including Twain, Henry James, Frances Hodgson Burnett, and Sarah Orne Jewett. Madame Blanc visited Sarah at her home in South Berwick. She also visited the couple at Fields’ Boston and Manchester-by-the-Sea homes. Jewett and Fields visited Madame Blanc in her small village of La Ferté in 1898. On that visit, Jewett wrote separately to two friends that visiting Madame Blanc felt like being home. * Blanchard, Paula. Sarah Orne Jewett: Her World and Her Work (Cambridge, Massachusetts: Perseus Publishing, 1994), 262.